Komask and the perils of the Antwerp Museum

Komask discovered seven meter’s correspondence in which the perils of the repossession of the stolen paintings can be read. On September 14 in 1815 the delegation that residence in Paris wrote a letter to Verdussen, secretary of the Maetschappij ter Aenmoediging van de Schone Konsten (from 1817 Komask) about different problems faced by the members of Komask during their residence in Paris where they attempt to recover stolen works of art by the revolutionary guards of the
French.  In this letter they wrote that they had the carts to transport the paintings and that they would shortly leave to bring them back to the United Kingdom of the Netherlands (1815–1830). In this and all the other letters they speak about ‘the painting of His Majesty’ considering William I as king, owns the whole nation since 1815, he also possesses which was robbed before his mandate. Odevaer, William I court painter, acts in name of the king. He’s the local royal envoy and is responsible for the totality of the artworks but his personal commitment focusses entirely on the stolen goods from Bruges, where he personally supervises. The group of Balthasar Ommegacnk consists of the following Komask members: Jean Jacques Van Hall and Pierre Van Regemorter (this group also consists the adventurer Jean Charles Bull, the latter is not a member of Komask). In the letter they ask if Verdussen can convene the SMR of the Academy and the RVB of Komask to determine where the paintings, whose original residence was destroyed by the French, should be stored. The idea of making a real museum already exists (the museum was already authorized by Napoleon in 1810) but had not yet been achieved at that time. 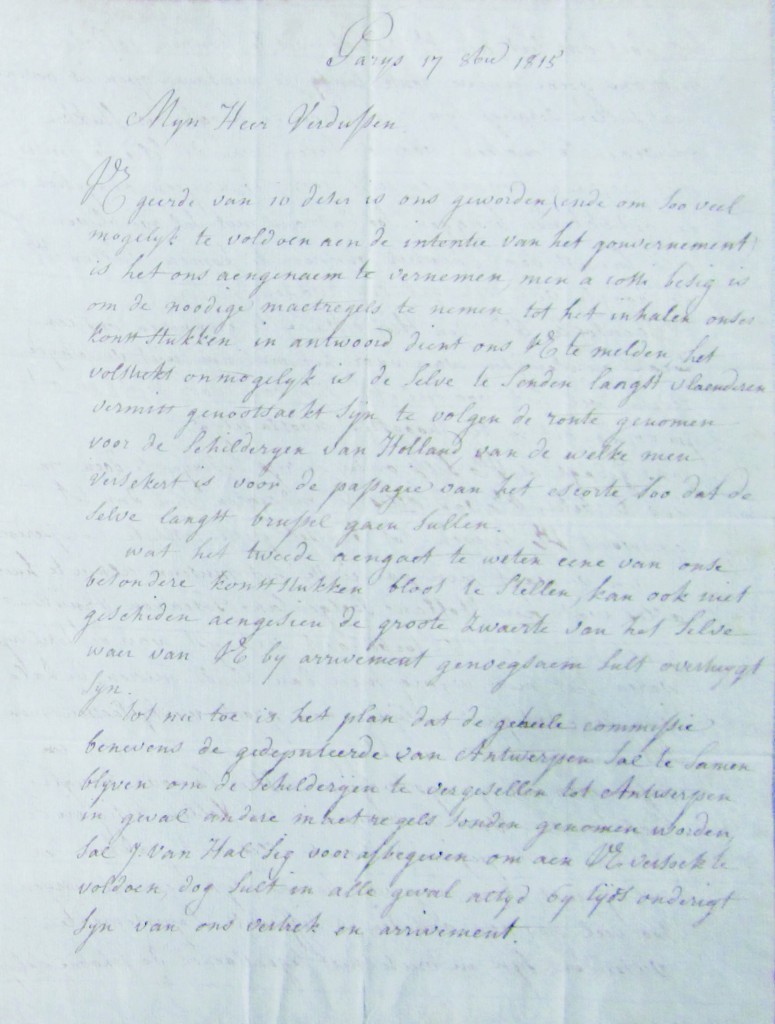 They write some remarkable things:

A- they are afraid to drive through Brussels:

“… In response we let you know that it is absolutely impossible to send the paintings through Flanders since we are forced to follow the same route for the Dutch paintings, this transport is ensured by the military escort. That route, however, is about Brussels …”

-from the contents of the letter can be seen that Verdussen himself requested not to drive through Brussels:

” … It makes us suffer that we cannot meet your request, since a different route back to the military is open, moreover, it will be required, regard the height of the pieces , to make detours to cities where selvede poorten niet passere, konnen,…”

-The Groups fear will prove unfounded since the totality of the consignment at the moment the convoy enters the city gates of Brussels is taken up by the local government.

B- they want to guarantee that everything will get in Antwerp:

“… The plan is so far that the entire commission, together with the deputy of the City Antwerp (Van Hal) will continue together to accompany the paintings to Antwerp. In case other measures should be taken, Mr Van Hal will travel to Antwerp as you requested. We will keep you anyway informed of the time of departure and arrival…”

C- They worry where they will have to unpack the paintings and ask again for a museum:

“… We ask you to recall the mayor* to designate us a room for the museum and this for several reasons: it is important that a depot can be used directly for unpacking and handling … .” **

” …After greeting you, we have the honor to call us with any consideration

Your most humble servants,

* The mayor of the city of Antwerp was at that moment Phil . Jos Vermoelen until 1817 when Florent Van Ertborn took over.  –

** the 27 artworks that (because of the absence of the original buildings to which they belonged) remained after refund of the other works whose buildings were still undamaged were exhibited from February 15, 1816 in the Franciscan monastery (the building now accommodates the Royal Academy of Fine Arts)

*** The members of Komask all have (except Jean Charles Bull since he resides abroad) received a medal from William I for their heroic actions in repossessing the stolen works.

The totality of the association also receives the title “Royal” as gratitude of William I, since then it is called “The Royal Society for the Encouragement of Fine Arts “

On September 14, 1817 the charter appears: William I grants. 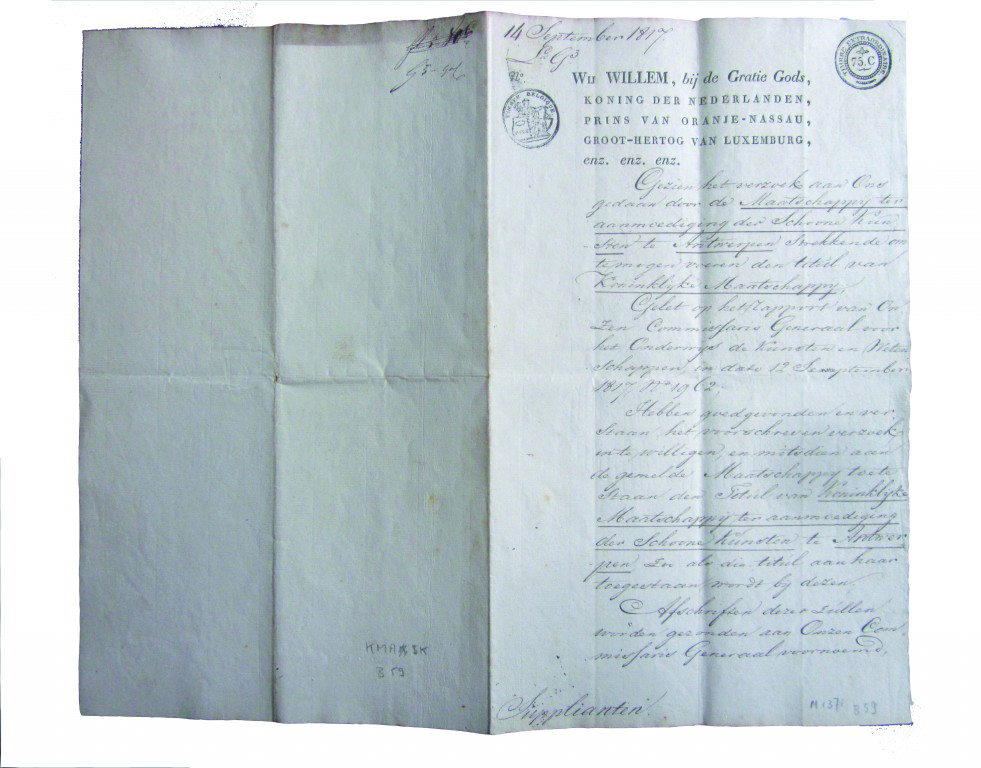